I had an urgent phone call from a friend whose physio had given up on him. Literally, whilst he was on her table. She said she couldn’t do anything whilst he was so tense. She had told him to do something to help him relax, and he thought of me.
He had a diagnosis of a slipped disc in his lower back, and trapped femoral nerve (apparently quite rare, but excruciating. Not a happy camper. Inching up the stairs in pain and feeling really morose he looked very sorry for himself.

He gingerly got on the table and I started gently feeling along his spine. The musculature up and down his whole spine was in spasm- it was working so hard. I told him I wouldn’t be touching the slipped disc immediate area as he was in too much pain, and I didn’t want to exacerbate it.

Gradually, through little movements we freed up the spasms, and as I’d avoided the difficult area to start his nervous system had been able to relax enough to allow me to then work there usefully by halfway through the session.

Part of Feldenkrais’ power is in its gentleness. When we press hard in an area which is already sensitised we trigger protection responses, which usually involve contraction. Which if we’re aiming to free areas of pain and tension, is somewhat counterproductive. By working gently, slowly, and even avoiding a painful area we avoid triggering our physical safety mechanism of increased contraction, and ease the parasympathic system into action: where healing can take place.

I’m pleased to say he got off the table feeling both better physically and emotionally. Pain triggers a fear response in most of us, the fear of not getting better. When we’re shown that our issue doesn’t have to be permanent, that it can change, it changes how we respond. Even if it returns, so that we’re not adding so much fear (and usually the physical tension that goes with) into the picture.

I’d like to echo Feldenkrais’ words here- “its not flexible bodies I’m after, but flexible minds”. What we think and feel emotionally has a direct effect on how we hold ourselves physically. So working with the physicality is a way in to how we think, without having to talk about it, as well as working together with the person on the table to help them ‘organise’ themselves better so they can move the way they want, with less or no pain.

To ask a question, or book a session
Email me!

Join us for the next workshop… 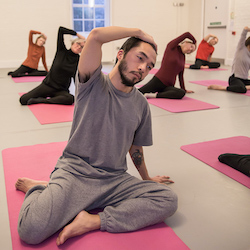 Live Group Classes- a bundle of 6

Six Group lessons in a bundle. You'll have 10 weeks of teaching time to take them in. Or, If you can't make a week, let me know and I'll send a recording.